Nikko 日光, is a beautiful town at the entrance to Nikko National Park. Nikko is rich in history, beautiful architecture and nature with lots of shrines, gardens, and waterfalls. Nikko is famous for the stunning Toshogu, Japan’s most lavishly decorated one of a kind shrine and the mausoleum of Tokugawa Ieyasu, the founder of the Tokugawa shogunate. Nikko is only a short journey from Tokyo, so is easily accessible for a day trip. There are hourly trains departing from Asakusa, making it very convenient to visit Nikko.

Nikko is a beautiful town with so much to see. One of the most popular attraction is Toshogu Shrine 東照宮, the final resting place of Tokugawa Ieyasu, the founder of the Tokugawa Shogunate that ruled Japan for over 250 years until 1868. The shrine complex consists of several buildings set with the backdrop of a beautiful forest. Unlike most simple Japanese temples and shrines, the buildings are very decorated, with multi-color carvings and plenty of gold leaf, and show strong Chinese influence. The shrine is also unique in its style with gold, scarlet, and other bright colors. According to some research I did, Toshogu shrine still has both the Buddhist and Shinto elements. Shintoism and Buddhism were separated in the Meiji Period but because these elements were so entwined at Toshogu shrine the separation was never completed. According to stories, Japanese sometimes consider that the shrine is overdone, and flashy, as most precious materials were used and the most talented artists were employed to display wealth and prosperity. But honestly, Toshogu Shrine is the most beautiful shrine I have seen in Japan so far!

Among the many buildings at Toshogu, the most remarkable one is a pretty five-story pagoda in front of the main entrance gate. The main pillar of the pagoda hangs ten centimeters above ground to combat the lengthening and shrinkage of the wood over time. We couldn’t go inside the pagoda as the interior of the pagoda is only periodically open to visitors.

There are also three unique carvings which are very famous such as the “see no evil, speak no evil, hear no evil” monkeys, Sozonozo elephants, and the sleeping cat. I read that ‘The Sozonozo Elephants’ or ‘imagined elephants’ were carved by an artist who had never seen elephants!

There is a cat carving called ‘Nemurineko’ over the start of a long flight of stairs which lead up to the mausoleum of Tokygawa Ieyasu. The climb is really steep with a number of steps, so, sort of tiring! Also on the level with the mausoleum are hollowed trees encircled with rope and a crane statue. The Karamon door, or Chinese gate, is also beautiful. They also have a lantern made in the Netherlands, as well as European chandeliers and lanterns offered by Korea.

Taiyuinbyo 大猷院廟 is the mausoleum of the third Tokugawa shogun, Iemitsu, the grandson of Ieyasu. Iemitsu’s lavish mausoleum complex resembles Toshogu Shrine in its layout and architecture, but it was intentionally built more modest than the Toshogu, due to Iemitsu’s deep respect for his grandfather.

There is a vermillion Niomon Gate, the entrance to the Taiyuinbyo, just a short walk west of Toshogu Shrine.

There is a  sacred bridge called Shinkyo, a part of Futarasan Jinja Shrine, located at the entrance of the holy area. A long time ago, only a limited number of people could use this bridge for shrine-related events but now anyone can use this bridge to feel the special holy atmosphere. Considered one of the three most unusual bridges in all Japan, the Shinkyo Bridge is also a registered World Heritage site. The bridge offers beautiful views and is a perfect spot for taking photographs.

Well, We couldn’t cover all of Nikko in one day. There is so much to see there! It would be a good idea to stay in a ryokan overnight to enjoy all the beautiful temples and shrines with peace and without hurry!

Access – There are direct trains on the Tobu line between Akasuka and Nikko which takes two hours and 1360 yen. Toshogu and other shrines and temples are located a 30-40 minute walk or 10-minute bus ride from Tobu and JR Nikko Stations. I recommend walking one way at least, as you can enjoy several beautiful sights along the way. You can also take a taxi from the station to the main shrine area which will cost somewhere around 2000 yen. 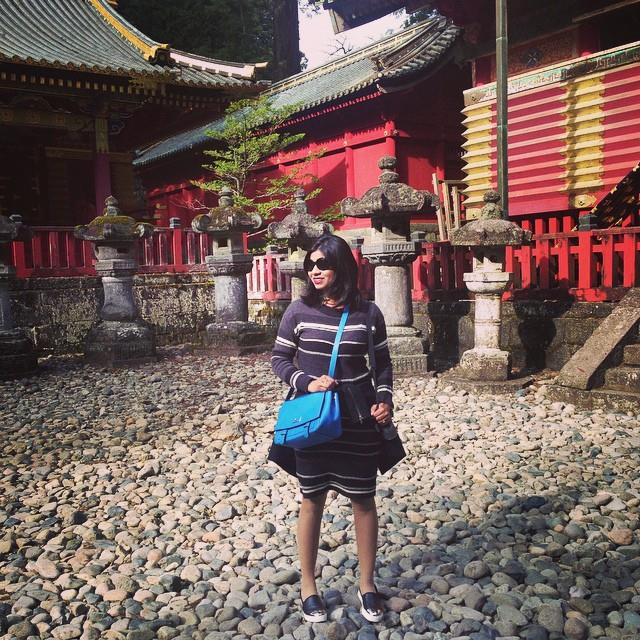